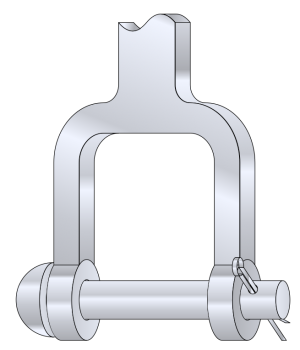 Shackles, also less commonly called gyves, are used primarily to secure, lift, and rig heavy objects like equipment. When moving a large piece of equipment or a heavy load, the shackle is the connector between the object itself and the device used to move it. A shackle works in the same way as a smaller connector, such as a carabiner on handcuffs, and is made to connect two points securely. When used on an industrial scale for rigging, the shackle is simply a far larger version.
There are many types of shackles, such as snap shackles, headboard shackles, and twist shackles, but most shackles made for lifting come in two main types: D-types and anchor shackles.

Regardless of the type, almost all shackles come with two main components, the pin and the body. The pin will sometimes be threaded to be screwed into the body, but may also come in the form of clevis fasteners. The body will most commonly be in a U or horseshoe shape, with holes at the end for the pin to fasten.

D-shackles, also referred to as chain shackles, are the most common shackle used in industrial lifting. The name comes from their shape, which is thinner than bow or anchor shackles and looks like a link in a chain. Most shackles are some variation of the D-shape and are used widely for moderate and heavy loads lifted in a straight line. D-shackles can bend if pulled at an angle with enough force for loads that need to be moved at an angle rather than vertical. D-shackles are usually made from stainless steel, galvanized steel, or zinc-plated steel for maximum strength.

Bow or anchor-shackles are the second most common design for lifting heavy objects and a different design that looks more like an ‘O.’

This design’s advantage is that the O-shape means that the shackle can take pressure from many different directions, meaning they are more suited to lifting an object that may be liable to move. Also, if multiple loads are pulling from different directions, this type of shackle will handle the pressure without becoming misshapen. One of the most common bow shackle types is the Crosby shackle, which you’ll commonly find in the rigging industry.

Bow shackles can also accommodate a lifting strap wider than on a D-shackle. When selecting a lifting belt for a shackle, the fabric must not pinch or bunch up, which could cause slipping or damage. The disadvantage to the bow shackle’s O-shaped design is that it can’t bear the same load as the D-shackle, assuming you’re lifting in a straight line.

How are shackles used?

You’ll find shackles in many places but will commonly find them in industrial settings where heavy lifting is needed, such as on large ships and crane rigging. Lighter shackles can also be found in domestic environments, such as on tow ropes, and used in safety equipment, such as climbing harnesses. Shackles are a simple, but powerful solution to any situation requiring heavy lifting and other heavy lifting equipment and types of machinery, such as large chains, wire ropes, and cranes.

Shackles are usually a relatively simple piece of equipment to use, but depending on the job that needs to be done, there are some things to consider. Most of the time, the trick is knowing what the best shackle for the job is. Before using a shackle of any type, there’s a series of checks that should be done to maintain adequate safety:

What sizes are available?

If you’re browsing shackles to buy, you’ll find that there are many small, medium, and large options in both D and bow style. The measurements given are usually based on the diameter of the shackle’s body, although some may have a specified pin size. When making your purchase, you should take the nature of the job into account when deciding on your shackle’s size and material, as these will contribute to the maximum load that can be handled. All shackles should come with a manufacturer’s guideline for the safe working load it can handle, and this can sometimes be found on the body of the shackle itself. After you’ve purchased your shackle, it’s worth keeping the pin length and measurements of the shackle somewhere safe, as you’ll be able to check these for signs of bending over time. If the eye-to-eye distance becomes wider than what’s specified by the manufacturer, it shouldn’t be used anymore.

Both D-shackles and bow shackles can have different pin types depending on the manufacturer, with the most common being a screw pin. A screw pin will be partially or entirely threaded to maintain a secure placement in the shackle’s body. More often, the pin will only be partially threaded to allow for a smooth surface on the area in contact with the fabric.

For a shackle that will have the pin removed frequently, a screw pin will usually be used, as this allows for a secure load, but can also be removed easily. For a shackle that will hold a burden for an extended period, a safety bolt will more commonly be used, as this will have no risk of moving over time, but takes more time to set up and take apart.