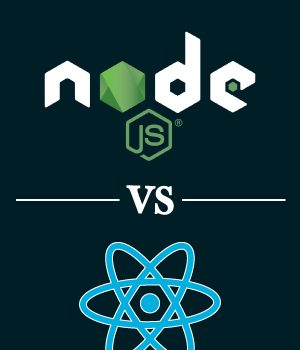 Being a developer at the core, one who has worked on all the latest technologies, I completely appreciate the strides in value and ease of development that JavaScript frameworks have added to the development process. But now with many options available, the development community is spoilt for choice.

Suppose you are on the way to create an efficient, appealing, and highly functional web application. In that case, choosing between JavaScript frameworks is conceivably the most formidable task on your to-do list. Choosing between Node JS or ReactJS probably has you up in the night, searching for versus analyses that might help you make a choice.

Unfortunately, most of the information you find will have a plan behind the choice suggested. That is why I have decided to collate a completely unbiased comparative analysis of Node JS and React JS for you to decide which to opt for your next big project in 2021.

I will be considering parameters such as framework maturity, interoperability, size, features, dependencies, and a lot more to help you make a decision that results in project success. So without further ado, let’s get to it.

Rather than a framework, ReactJS tends to be more of an open-source JavaScript library. ReactJS development enables programmers to build highly appealing UIs with robust rendering performance. ReactJS is more dependent on “view” in the model view controller architecture. ReactJS was launched to provide a resolution for large dataset rendering issues faced by JavaScript frameworks.

The Pros of ReactJS

It is easy to run ReactJS on the server and then render a virtual DOM to return to the browser as a web page. This proves to be a significant benefit as Javascript frameworks’ main issue is that it is hard for search engines to read JS-heavy apps making the app developed in ReactJS SEO friendly.

ReactJS is excellent for achieving good overall performance for the app as it generates its own virtual DOM. ReactJS also takes care of all DOM tree updates and any changes made in the DOM, adding to development flexibility.

React JS is known for its rapid updates that enable developers to remain on the cutting edge of technological innovation and leverage the ever-growing capabilities of React JS.

Writing code is a time taking process with a large percentage of tasks that are redundant and can be replaced with automation. Importing components, which are readymade blocks of code is easy in React JS, thus simplifying the coding process.

React JS is cross-platform compatible and instead of writing unique code for each OS, React JS code can be reused for both Android and iOS programming without significant alterations.

The drawbacks of React JS are

Even though ReactJS scores highly when it comes to performance, I have faced issues in its architecture as well as its steep learning curve.

Unlike its counterparts, being component-based, React JS can sometimes prove difficult to work with given that common coding practices are not integrated into it thus making its learning curve steep for novice and even experienced developers.

React has its limitations as it is often mistaken to be a development framework where it actually is a library from where components can be imported into existing codebases.

Unlike ReactJS, which is a library, NodeJS is a server powered by the Google Chrome V* JavaScript engine. The main use of NodeJS development is the simplification of application development by executing JavaScript on the server-side.

The Pros of NodeJS-

NodeJS can be used as a server-side proxy thus facilitating multiple simultaneous connections without blocks. NodeJS works great in the event of proxies for disparate services with varying response times.

NPM or the Node Package Manager comes bundled with every NodeJS installation to support package management.

Node JS was developed with a view of industry buy-ins and therefore its creators made sure that Node.

Node JS is a robust and highly efficient framework that is soon gaining popularity among developers across the globe. With contributions from big businesses as well as individual coders, the model has built a massive support community.

The drawbacks of  NodeJS are

Despite its advantages, NodeJS doesn’t score well when it comes to scalability given that it requires numerous systems working to fulfill tasks.

Node JS can prove quite rigid during development given its restrictive aspects. Node JS development can be extremely time-taking and glitch given that a single CPU isn’t sufficient for multiple tasks.

Even though node JS is growing steadily in popularity and adoption, most developers used Node JS especially for lightweight web server development given that tasks which are CPU intensive are not possible while working on Node JS.

ReactJS vs. NodeJS: The best bet for your next big project

Detailed below is a comparative analysis of ReactJS vs. NodeJS based on Google trends while evaluating criteria of popularity, performance, migration, learning curve, framework size, development speed, and community support. So here we go-  Popularity

In the popularity criterion, ReactJS takes the cake with 500,000 downloads by developers. NodeJS is second with 100,000 downloads. Both frameworks are immensely popular given the features and utilities each provides thus easing development tasks and enhancing code efficiency.

In the UI of any application, DOM is considered a priority. NodeJS sport high levels of performance given that for memory allocations, it utilizes a virtual DOM. React JS offers a deep learning curve and the flexibility of changing feature options, it may sometimes prove challenging to work with. However, where performance is concerned, implementations go flawlessly on ReactJS better than NodeJS

When learning curves are compared, NodeJS development comes in at the first place with an exceptionally pliable learning curve, one that facilitates a lot of automated handholding to get developers up to speed., ReactJS ranks second with a slightly sharper learning curve. But don’t be disheartened. The communities of each of these two frameworks have ample amounts of tutorials and step-by-step instructions.

Both frameworks are of manageable sizes, with React JS just passing the 100KB mark, and Node winning with a size of just 80KB. Being so lightweight, both frameworks have received wide-spread adoption across the development community.

Development speed is calculated based on the number of libraries accessible to developers in a particular framework. Though ReactJS architecture supports greater ease of scalability, NodeJS trumps the ReactJS with ease of scalability and significantly larger library access

ReactJS is maintained by Facebook, giving it a very large and supportive community. NodeJS is an open-source community but is still gaining popularity and ranks second. But that does not take away from NodeJS’s rapidly increasing adoption in enterprise tech stacks.

And the winner is

After comparing both frameworks, ReactJS come first by beating NodeJS by just a single point. While React JS allows for lesser code and higher performance, NodeJS is best for scalable and fast network apps.

Both the above-mentioned JavaScript frameworks deliver advanced features and high performance. While the comparative analysis above is a good point to start, your JavaScript framework choice should depend upon business needs and desired app goals. Each framework is unique in itself and has its pros and cons that affect development processes. I truly hope that this article proves of assistance while you make your choice.

Jaydeep Patadiya is a senior business development manager at one of the best custom software development companies and always has the answer to- what’s on the customers’ mind? In a fundamentally changing industry, he helps customers make the right decisions by connecting the right dots and adopting new technologies. Beyond work, he is a fitness freak and always ready for any form of marathon race events.

If you like the article then check Technoroll for more!

How To Manage A Software Development Team Effectively