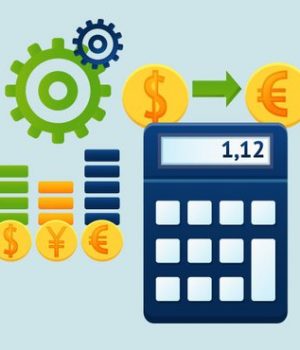 Every company is involved with currencies, and global firms deal with numerous currencies at once. The same is true for investors; they must keep an eye on constantly changing currency rates and follow their fluctuations in order to convert their profits or investments. The significance of currency exchange cannot be overstated. Now that cryptocurrencies are becoming more widely accepted, their popularity is skyrocketing.

This increases the demand for currency exchange since customers can obtain exchange rates quickly and without having to wait. With the exchange rate API, you can get worldwide currency rates and conversions at your fingertips. Currency Exchange API is implemented into a web app to provide seamless operation and convenience of use for customers. In this article, we will go through what a progressive web app is, what exchange rates and REST APIs are, and how to create a Currency Exchange Rate Progressive App via REST API.

What Does Progressive Web App Mean?

Progressive Web Apps are apps made utilizing the web and via technologies like JavaScript, HTML, and CSS. They are comparable to a website in that they may be accessed from any platform, such as a mobile phone or a desktop computer. They have the benefit of being freely deployable on the web, where consumers can download them immediately to their home screens.

Developers can create a cross-platform application with a smoother operation, as well as compact and smaller size, with just one line of code. Platform-independent Progressive Web Apps make the web more user-friendly, dynamic, and responsive. They can communicate with native apps, and a Progressive Web App is the only way to go if you want to create an app that can be used everywhere.

What Do You Need to Know About REST API?

REST stands for representational state transfer and REST APIs are the APIs that conform to the standards set by REST architectural style. REST APIs are the most prevalent mechanism for linking components in microservices architectures because they provide a versatile, compact way to integrate applications. They are the key to the effective design of Progressive Web Apps since they do not require the installation of extra programs or libraries.

REST dictates the rules for how the architecture of an Internet-scale distributed hypermedia system, such as the Web, should behave. In addition to this, The REST architectural style emphasizes scalability of component interactions, standardized interfaces, component deployment independence, and the establishment of a layered architecture to enable caching components. REST’s goal is to enhance scalability and simplicity, making it the preferred method for developing Progressive Web Apps.

Fixer.io is Apilayer’s JSON API for foreign exchange rates and currency conversions, which is a revolutionary and easy API for forex rates. It is not only well-known throughout the world, but it also gives real-time exchange rate data for 170 different foreign currencies – updated every 60 seconds. To achieve the highest level of safety, your Fixer API connection is secured with bank-grade 256-bit SSL encryption.

It has a dedicated and well-maintained world-class support crew that is always pleased to help at any time of day or year. That is a guarantee. Furthermore, Fixer’s data is extremely credible because it obtains information from financial institutions and banks all across the world, including the prestigious European Central Bank. Fixer should be the first choice for experts who want to create a Currency Exchange Rate Progressive App using a REST API since it is both safe and reliable.

How Can You Make The Most Out of Fixer API?

Due to its greater capabilities, Fixer.io is owned by Apilayer, which was recently bought by Idera Inc, the owner of Visual LANSA. It was recently upgraded with a slew of new features that remove its prior limitations and difficulties. Users will now take advantage of lightning-fast currency conversions that are guaranteed to be accurate.

With the most recent upgrade, Fixer now has access to over 100 different currencies. The total number of currencies has now reached 170. Fixer has also improved its dependability and responsiveness. Fixer’s previous version was solely reliant on the European Central Bank, which was updated once a day. Users have significant difficulties since they must deal with and change currencies on an hourly basis. According to the subscription level you pick, the new version now contains 16+ linked data sources that update currency conversion data hourly or even every minute. according to the subscription plan you choose.

Furthermore, the new version includes three new endpoints, including a Direct Conversion Endpoint and a Time-Series Conversion Endpoint. Fluctuation Endpoint allows customers to view variations in currency exchange trends in order to make an informed choice about the best time to exchange currencies. This also enables users to forecast currency dips and rises so that they can make an informed decision. The API documentation has been revised as well, and now includes a comprehensive tutorial for troubleshooting any issues that may arise during installation. If you’re looking for a great Currency Exchange Rate API, Fixer is the way to go.

How is Fixer Revolutionary?

Fixer is used and trusted by over 200,000 developers and companies around the Globe which include numerous well-reputed institutions like Kraken, Microsoft, instacart, SAMSUNG, and Bershka. It is the first preference if you are looking for real-time exchange rates. It is built for developers and to make them comfortable. It tops its competition by several miles by offering unmatched potential and features in the market. Fixer has a principle — developers first. The website ensures that you have access to ample documentation and code examples that you can easily implement your API in under 10 minutes.

In addition to all this, Fixer has a plethora of exciting features and perks that no other product on the market offers. Fixer API comes with guaranteed availability, scalable volumes, and a response rate of milliseconds. Detailed API documentation is also provided to enable instant implementation at any level. Perhaps the biggest addition to its arsenal is that it also provides historical exchange data all the way back to January 1999. This is fantastic for potential investors and stockbrokers as they can predict the fall or rise in any currency by analyzing the past trends and the market carefully. Aside from live data, Fixer also comes with separate endpoints for single currency conversion and time-series data. You should definitely opt for Fixer API if you truly want to take Currency Exchange Rate integration to next level.

What Should Be Your Choice?

Fixer should be your only option because no other exchange rate API on the market compares to it in terms of capabilities or pricing. It not only comes with a free trial, but the basic edition also costs only $10 per month or $8 if paid annually. The standard version includes hourly updates, historical data, SSL encryption, and a conversion endpoint, as well as 10.000 API calls each month. This is definitely a win-win situation because you’re receiving numerous great features at such a low price.

The most expensive subscription, which includes 500.000 API calls per month, 60-second updates, Time Series Endpoint, Fluctuation Endpoint, and All base currencies, is just $72 if paid annually. Talk about value for money! With an average response time of merely 48ms and 19 years of historical data, Exchange Rate APIs cannot get better than Fixer.io.