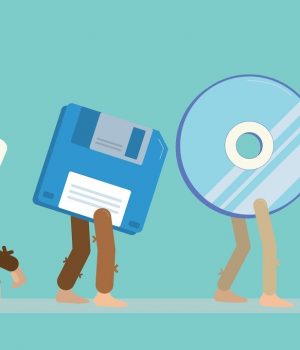 Nowadays, we take data storage for granted. However, to get to where we are now, it took over 100 years and a number of landmark devices that each took huge steps forward. Even though we look back on them now as outdated, inefficient, and unreliable, at the time they were developed they were seen as groundbreaking and paved the way for the next development.

Even if we don’t know a shift register from a flip-flop (which, incidentally, are used for data transfer and temporary data storage and were used to handle data processing in the early years of computing), we have all come across these data storage devices before, and for the first of them, we need to go back over a century, and a data storage method that could only store up to 80 characters.

Although people of a certain age will remember seeing punch cards used in computers (or may have even used them themselves), punched cards were used to program looms as far back as the 19th century. Cards are still used in some countries today for data storage though not widely.

The home computer explosion also brought the use of the magnetic tape cassette to the fore of data storage. A user of a Commodore Pet or the Apple II could save their work on any old C90, or load one of the early video games.

While all of this was going on in bedrooms across America, IBM was busy developing the HDD or Hard Disc Drive. The first weighed over a ton but advances saw them become an integral part of the PC and are still used in computers today.

The widespread use of digital cameras and smartphones saw the use of flash memory in first the MMD card, and then the SD card as portable storage for media devices. These could be used in various devices and plugged straight into a computer (or using a card reader) to transfer the files, which were typically music or images.

Another data storage device still used today is the USB flash drive, although you might have also heard it called a thumb drive, pen drive, or memory stick. These became popular portable storage devices because of their size and convenience of just being able to plug them into any device with a USB port.

With the more widespread use of the internet the need to access data whenever and wherever you were become paramount, as did the ability to share files with your employees or team almost in real-time. The advent of AWS in 2006 meant that you weren’t limited to physical constraints and had access to as much storage and data processing as you wanted (or at least could pay for)

Each of these devices had very little capacity to start with and would be utterly useless today (early HDD could only store a single MP3 file) however, without each of these steps we’d have none of the technology we currently rely on for pretty much everything we do. Check Technoroll for more!

The Benefits of Going All-in on Apple Products