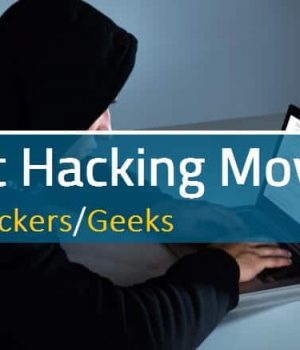 Hacking is Illegal There are obviously people out there who hack in the service of evil — without them, I wouldn’t have a job. I work as a “white hat” hacker paid specifically to stop those people. But most of the hackers I know spend their time and brain juice on research. Call it preventive vandalism — people pay us to break into their websites and then tell them which window we used.

Blackhat is a newly released movie by Chris Hemsworth. In this movie, hackers hack Chinese nuclear power plant to start a nuclear reaction. Simultaneously, they also hack the stock exchange and steal millions of dollars from the bank.

This film involves a serial killer who rigs contraptions that kill his victims based on the number of hits received by a website KilWith Me.com that features a live streaming video of the victim.

The Fifth Estate is an unauthorized account of Julian Assange and WikiLeaks. Cumberbatch plays a believable Assange as a egotistical, idealist that is out to change the world. Few Americans know that Assange is a famous (or infamous) hacker in his native country of Australia. He broke into the Pentagon, Citibank, NASA, and Stanford University, among other facilities, before being caught.

In this movie, two people get a call from an unknown number by a woman. They get a task on the phone that if they don’t follow the phone call they would die. This movie displays supercomputer hack on all networks and military networks.

Live Free or Die Hard (also known as Die Hard 4 and released as Die Hard 4.0 outside North America) is a 2007 American action film, and the fourth installment in the Die Hard film series depicts a scenario where a hacker played by Timothy Olyphant (of Justified fame) takes down nearly the entire U.S. infrastructure in an attempt to transfer trillions of dollars from the Federal Reserve to his account.

Although the MINI Coopers are really the stars of The Italian Job (a remake of the 1969 film of the same name), Seth Green plays Lyle, a hacker among a group of elite thieves, who is able to manipulate traffic signals, among other devices, that make this grand theft possible.

This movie is based on famous computer U.S. hacker Kevin David Mitnick. Based upon the book and written by his nemesis, Tsutomu Shimomura, the story tends to glorify Shimomura. Mitnick operated in the 1980s and ’90s and eventually went to prison for a couple of years. Now, he is a highly paid IT security consultant, speaker, and writer.

Also Read: How To Secure Social Media Account From Hackers.

This is one of the greatest science fiction movies. The movie depicts a dystopian future in which reality, as perceived by most humans, is actually a simulated reality called “the Matrix”, created by sentient machines to subdue the human population, while their bodies’ heat and electrical activity are used as an energy source. A character named “Neo”, who is a computer Hacker, learns this truth and is drawn into a rebellion against the machines, which involves other people who have been freed from the “dream world”. The Matrix franchise is a trilogy movie series.

This cult classic got a lot of things right, especially the way they showed kids using technology to create their own community. In Hackers, Angelina Jolie and Jonny Lee Miller portray two youthful and hip hackers. Miller portrays a hacker who got caught as a very young child (11) after crashing thousands of computers and has been sentenced to zero computer access until his 18th birthday.

These recently released movies about hackers “Algorithm”, has its plot revolving around following the grafts of Will, who is portrayed as a freelance computer hacker. He manages to break into a top-secret government contractor and subsequently downloads all their recently developed programs.

Cybergeddon is also a TV series created by the concept of Ethical hacking. This hackers movie Released in 2012, this movie revolves hackers who hack into computers with the motive of robbing money from the banks. However, it so happens that the Cyber Crime is out of control and the police face failure to handle these hackers.

I Hope this latest hacking movie 2020 list helps you hell lot to learn amazing hacking skills and joyful to watching these hackers movies. Don’t forget to share it with your friends. Nothing can be more enticing than watching movies after a long and tiring day as it refreshes us and helps us feel alive again. It gives you the strength to face next day and live through it. The reason I said this is because life ain’t getting any easier and that is no breaking news for anyone of us. However, the point is, how do we live through it, and I figured this is how. Relax for a while and enjoy the drama and for once forget the practicality of life and laugh till your stomach hurts. Happy Watching to you! 🙂